An account identifies a participant in an Antelope blockchain. A participant can be an individual or a group depending on the assigned permissions within the account. Accounts also represent the smart contract actors that push and receive actions to and from other accounts on the blockchain. Actions are always contained within transactions. A transaction can be one or more atomic actions.

Permissions associated with an account are used to authorize actions and transactions to other accounts. Each permission is linked to an authority table which contains a threshold that must be reached in order to allow the action associated with the given permission to be authorized for execution. The following diagram illustrates the relationship between accounts, permissions, and authorities. 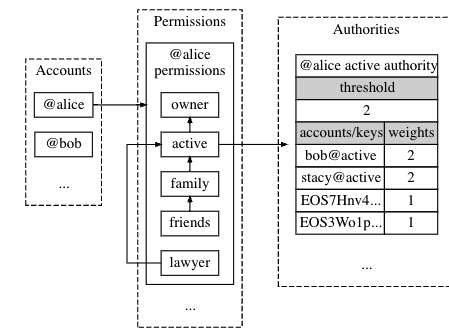 By default, when Alice's account was generated it initialized 2 native permissions, also known as addresses - specifically the Owner and Active Keys.

Designed for security and consensus amongst a group of stakeholders in a business or for an individual ramping up security. It is an account that has enabled permissions to multiple entities with keys within that account and requires most of the keys to sign the transaction to execute.

There are various ways to create an Antelope account. Some methods are relatively easy whereas other methods can be more secure and complicated. The 2 methods covered in this section are the automated Telos Account generator on the browser and the Cleos generate account command for local dev purposes.

Generate a new account using the Antelope.io for creator account and provide a name for the account the Owner Key after all other parameters are met.

Besides identifying participants in an Antelope.io blockchain, actions and transactions are other reasons for accounts to exist. An action requires one or more actors to push or send the action and a receiver account to whom the action is directed. A receiver account is also needed when leaving proof, in an action receipt, that the action was pushed to the intended recipient.

In contrast, transactions are agnostic to accounts eventhough there is an indirect link to them through their associated keys. Transactions are signed using one or more signing keys belonging to one or more actors involved in the actions that form the transaction. This can be the receiving account itself or other authorized actors specified on the authority table from the receiving account's permission.